Launched in 2007, PJ Fire has quickly established itself as a leading supplier to the Fire Trade. Now in a modern and substantial 20,000 sq. ft. office and factory environment in the heart of Chesterfield, PJ Fire is perfectly positioned to continue to grow actively to meet ongoing increases in demand for its product and services. Significant new investment in plant and equipment has been made to support our exciting future business development plans.

One significant investment was a new Straaltechniek 3 Wheel ‘Y’ Track Hook Shot Blast System installed in 2014. Since 2007 PJ Fire had used two Table Blast Machines which in the opinion of Straaltechniek was not the correct application for their products. Production runs struggled to clean more than 400 fire extinguishers per shift and due to the poor blast quality hours were spent manually ‘touching up’ prior to painting. On top of the extra work after the blast process and due to the only way PJ Fire could mount the cylinders on a table machine there were other issues concerning excessive wear to parts of the machine which caused production downtime and emergency breakdown costs. The blasting process had become a significant ‘bottle neck!’

Peter Johnston Operations Manager at PJ Fire recalled ‘At PJ using the two table blasters we were barely achieving 400 bottles per day and to meet future demands we needed to increase production through the blasting and painting process. Jay had been telling us for a number of years that a hook machine was the correct application and that by sharing the power of two 7.5kW blast wheels on the standard machine to three 5.5kW High Performance Long Life GN Technology Blast Wheels to give a faster and better blast coverage was a master stroke!

Peter went on to say ‘PJ are now achieving 1400 extinguishers per day and the machine has been virtually maintenance free since it was installed. In over 2 years other than a roof slot brush change due to normal wear and tear we have not had to buy any spare parts or service labour other than a yearly routine inspection by Straaltechniek Service Engineers’ 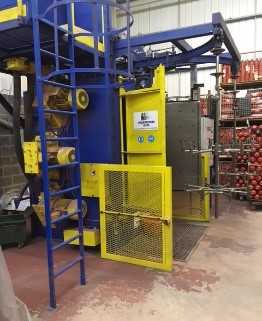 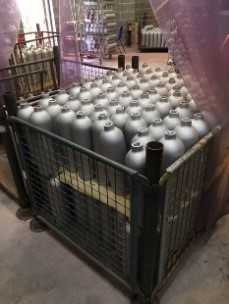 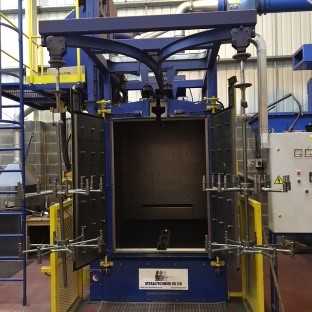